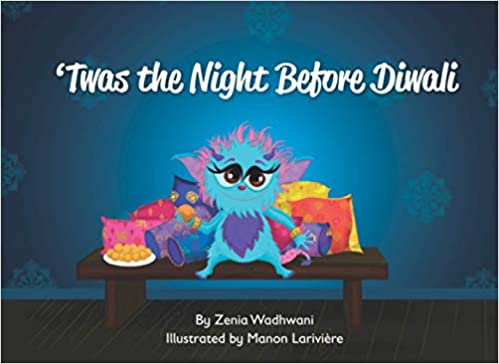 Toronto, Ontario – Just in time for the Diwali season, a new, colourful and playful book makes its way on to the children’s literary scene. ‘Twas the Night Before Diwali, written by Zenia Wadhwani and illustrated by Manon Larivière, is a South Asian take on the famous Christmas poem written in 1823, with a magical character of its very own – this one likes mithai (Indian sweets) instead of cookies! Resonating with the times and speaking to the future, this debut story gives children of diverse backgrounds the opportunity to see themselves reflected in the books they read.

“We are living through such challenging and changing times, and I felt I just had to do this project now, not only for me, but for my daughter,” said Wadhwani, a long-time advocate for literacy and emerging writers, and now first-time author. “There’s such a lack of diversity in children’s literature, and while it’s getting better, there’s a long way to go. It’s important for me to find and read enriching books to my daughter that include people from different cultures celebrating their traditions. It invites other children to experience stories as windows, inviting them into a new culture.”

“Wadhwani’s nimble rhythm and Larivière’s spirited illustrations present ‘Twas the Night Before Diwali as a poetically and visually rich invitation to come inside, join the fun, and savour the sweetness of it all,” said Gurbir Jolly, Associate Professor, Children, Childhood and Youth Studies, York University. “This children’s book can easily stand alone as a treasured celebratory text, but the extended pleasure of immersing yourself in this work involves savouring its many nuances.”

The 32-page story is a self-published passion project that was originally inspired nine years ago when Wadhwani was pregnant and staring at a large tray of mithai on Diwali. After taking a playful photo, pretending she was about to devour it all, she came up with the Mithai Monster character who makes its debut in this book.

Based on the lunar calendar this year, Diwali falls on November 14th.

This is Wadhwani’s first children’s book. She has previously co-edited three anthologies:Bolo! Bolo! Second-Generation South Asian Voices (Kitchen Table Collective, 2000); Desilicious: Sexy. Subversive. South Asian (Arsenal Pulp, 2003); and Once Upon a Time in Bollywood: The Global Swing in Indian Cinema (TSAR, 2007). Wadhwani has spent most of her career in the non-profit sector and more recently in the area of corporate citizenship, specializing in community engagement, stakeholder relations and diversity & inclusion. She lives in Toronto.

Illustrator Manon Larivière                              Manon Lariviere left her hometown to train as a classical ballet dancer and later became a dance instructor for young children while pursuing studies in graphic design and animation at the CEGEP du vieux Montreal. Over the past 10 years as a freelance illustrator, she has given life to her own imaginary world through numerous projects. Her colourful imagination has no boundaries and her reputation has been built on creating original characters that evoke an enchantment with the whimsical.

Given the nature of our times, online interviews and virtual readings can be coordinated.