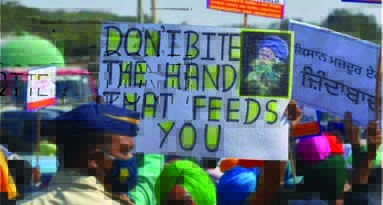 UN Secretary General António Guterres, in 2019, announced that in consistent with United Nations 2030 Sustainable Development Goals, it will host Food Systems Summit in September 2021, on the basis of Malthusian Theory.1

The agenda behind this game plan of corporate takeover was the brain-child of World Economic Forum (WEF) and Gates Foundation who had planned to globalize agriculture for their profitable opportunities, in the field of agriculture.

Prior to it, to achieve their goal, in 2006, a political project Alliance for a Green Revolution in Africa (AGRA) was created by Rockefeller Foundation and Bill Gates and Melinda Gates Foundation aiming at supporting the modernisation of African agriculture through assisting to build commercial input (especially improved seed and synthetic fertiliser) and output markets.

As AGRA reached its 2020 deadline, it was revealed that AGRA’s interventions had negative effect especially on the marginalised farmers. According to a report from a broad-based civil society alliance, unfortunately there has been a 30% increase in the number of people suffering extreme hunger since AGRA began, a condition affecting 130 million people in 13 AGRA focus countries. No evidence of large productivity increases was found anywhere. Rather small-scale farmers were not benefiting; poverty and hunger remained enormously high with 78% of rural farmers in extreme poverty.2

Furthermore, AGRA made African food production more dependent than ever on the will of Global multinationals, whose aim had been cheap inputs. It forced farmers further into debt and often bankruptcy. Obviously, AGRA proved a vicious circle that drove small-scale food producers further into poverty, even destroying their natural resources.

Evidently, private companies enter agriculture with the specific objective of garnering more profits from the same piece of land. This has been the global experience so far.

However, in the context of India, to expand their business in a country with 1.3 billion people, about half in agriculture, was the next stronghold where Global agribusiness, till-date, had failed to dominate the production of food. They needed to replace India’s traditional farm and food system to go. In consequence its smallholder family farmers must be forced to sell to large agribusiness groups. For advancing that agenda, in 2014, the WEF created a powerful group of corporate and government interests called the NVA India Business Council to provide private sector championship.

Later on in 2017, the NVA India Business Council included in it 17 agro-business companies.3 Astonishingly, NVA (New Vision for Agriculture) didn’t include in it even a single farmer’s organisations whereas BJP’s major financer’s Adani’s and Ambani’s were included in it.

Therefore, protesting farmers were not wrong to accuse that the 3 anti-farmer laws were just designed to allow billionaires such as Mukesh Ambani and Gautam Adani to enter farming; as recently both Adani and Ambani have registered 53 agro-based companies.4

Clearly, BJP’s financers were aware of the farm bills much before they became law and thus there was a sudden spike in the registration of agro-based corporations as a plan to capture the agricultural sector. India’s big corporates are now keen on farming because they have already exhausted all other options of making mega profits. They found the agriculture sector attractive since its one sector where demand is permanent and has a possibility of growth.6 As a result they are so keen to see the farm laws stay. And that is what India’s farmers are fighting.

The farmers’ unprecedented uprising against the government has also revived the debate on what Modi’s critics call a cozy nexus between the magnates and the BJP government. The protests, one of Modi’s toughest political challenges, follow an eventful 2020 when the combined fortunes of Ambani and Adani swelled by almost $41 billion, even as millions of Indians lost their jobs to the pandemic that hit the $2.9 trillion economy. [At present, Adani is 26th richest person in the world, while Ambani is now the 10th richest in the world, according to Bloomberg Billionaire Index.]

Obviously, indication of the agenda in store for India’s farmers was the upcoming September UN Food Systems Summit. Further, to make the Agenda 2030 a big success, the highest priority has been that India being a world’s largest population, be brought into the globalist web of corporate agribusiness control. Apparently, Modi government’s three deregulating farm laws were passed just before the UN 2021 Food Systems Summit. These laws were brought to oblige the corporates and implement BJP’s agenda of privatization.

A few days back, making a strong case for privatization of Public Sector Units, Prime Minister Narendra Modi had said that the “government has no business to be in business”. He was addressing a Webinar on privatisation by the Department of Investment and Public Asset Management in Delhi, on 24 February, 2021.7

That was the background, in which Prime Minister Narinder Modi’s government rushed three anti-farm laws through the Parliament in September 2020, almost without any consultation with the stakeholders. Fronting a crony capitalist move to agriculture, they were passed as Covid-19 raged through India, with the country reporting the world’s second-highest number of cases.

Since those laws entirely deregulate Indian agriculture, the farmers in unison stood up protesting against the fascist designs of the government. Driving tractors, trailers, trucks and minivans packed with produce, pots, pans and blankets, tens of thousands of angry farmers, mainly from the northern states have blocked the arterial roads into the country’s capital since November 26. Setting up a giant sit- in, the farmers have braved the winter in the open. They are demanding a total repeal of the new laws, which make farmers sell their produce on the open market – including agribusiness corporations and supermarket chains – instead of through state-run institutions that guarantee a minimum price.

The reason being that, be in force, these laws empower big corporations’ to buy farm land nationally and hold commodities to control farmer prices. It further allows large companies, food processing firms, and exporters to invest in the farm sector, and bypass local or regional state markets where farmers’ produce is normally sold at guaranteed prices, and allows business to strike direct deals with farmers. Against them a small farmer has no chance of survival. In India’s weak food chain, where 85 percent of farmers are small farmers with little surplus, this will ruin millions of marginal farmers and small middlemen. As discussed above, we have a recent example of a political project, Alliance for a Green Revolution in Africa (AGRA), that in the name of modernizing agriculture of 13 African countries, has further put more 30% people in extreme hunger.

Even in North America and Europe, agribusiness companies have pushed farmers out of agriculture. Despite massive subsidies in European Union, one farmer quits agriculture every minute. Knowing well that the markets will displace farmers, the same agriculture prescription is being applied in India.

The Modi government, on the one hand has been acting to initiate talks with the famers while on the other hand calling the movement motivated by Khalistani ideology or misguided by the opposition and even calling the agitators as Maoists. But it has completely failed in breaking the farmers’ leadership and rock-solid unity. In spite of government’s highhandedness, it’s remarkable that farmers’ uprising against the anti-farm laws has failed every plan of the government and of the corporate owned media to sabotage this movement. They are absolutely correct in their thinking that deregulation of markets as mandated by the new laws, and the entry of business firms, which will be not only Indian but also foreign, mean a severe undermining of the entire system of public procurement and minimum support prices. This awareness of injustice has invoked in them the sacrifices of Saheed-e-Azam Bhagat Singh and the fighters of the Ghadr movement. Once again they are reminded of the song Pagri Sambhal Jatta of the farmers’ movement, led by chacha Ajit Singh in 1906, against the colonial cruelty of the then British rule. Today, while fighting against another wave of colonial brutality, the images of those heroes have become the logos of the farmers’ struggle.

It is crystal clear that the interests and welfare of India’s estimated 650 million farmers were not the priority of the Modi government. On the one hand, there is talk of India becoming food secure and self-sufficient, while on the other, there is pressure from the richer nations for the Indian government to further reduce support given to farmers and open up to imports and ‘free’ trade. All this is based on hypocrisy.

Evidently, the hallmark of the neo-liberal economic growth model are the policy initiatives that promotes privatization of natural resources, take over of farm land, integrating Indian agriculture with the global economy, and moving farmers out of agriculture. This is how neoliberal Reforms wreak havoc.

The farmers at Delhi’s gate are fighting for the rights of us all. They have attracted widespread attention and support around the globe. With each passing day there is growing realization that the key demand of the movement of farmers to repeal the three controversial farm laws is justified. And mood of the farmers having surrounded Delhi is clearly indicating that they are not going to return without winning this battle. So, what India needs desperately is a policy that stops take-over of agricultural lands, and ensures sustainable livelihoods for 600 million farmers. As these 3 farm laws have plagued the agriculture in India, so the government should come out with a new bill granting MSP according to the Swaminathan formula (as the BJP promised in 2014), not allow big traders or corporations to lift produce below MSP; and first of all they should cancel all farmer debt, because while in debt their incomes will never double.

1. Thomas Malthus was an 18th-century British philosopher and economist noted for the Malthusian growth model, an exponential formula used to project population growth. The theory states that food production will not be able to keep up with growth in the human population, resulting in disease, famine, war, and calamity. For example, if every member of a family tree reproduces, the tree will continue to grow with each generation. On the other hand, food production increases arithmetically, so it only increases at given points in time. Malthus wrote that, left unchecked, populations can outgrow their resources.

4. The Economic Times Politics, 15 December, 2020 5. New Delhi, March 12, The Tribune Chandigarh (IANS): Adani Group Chairman Gautam Adani has achieved a remarkable milestone amid the Covid-19 pandemic, as he added the highest wealth to his fortune in the world, as per the latest Bloomberg Billionaires Index. The Bloomberg Billionaires Index showed that so far in 2021, Adani has added $16.2 billion, taking his total net worth to $50 billion. With this surge in his wealth, Adani is now the 26th richest person in the world; while, Reliance Industries Chairman Mukesh Ambani is the 10th richest person in the world with a net worth of $84.8 billion. So far in 2021, he has added $8.05 billion of wealth.

Regina city council removes statue of John Macdonald
Bhagat Singh remains a powerful Symbol of the struggle against Imperialism
Thinking of Chacha Ajit Singh And Agnes Smedley
How We Came to Suspect the Disquiet in Our Democracy - Badri Raina
Disha Ravi's Brave Statements in Court Should Challenge India's Judicial Conscience- Apoorvanand
Invoking farmers’ Revolt at Champaran ‘Kisan Morcha’ paid homage to Mahatma Gandhi On his Death Anni...
Share on Facebook Share
Share on Pinterest Pin it
Share on TwitterTweet
Share on Google Plus Plus
Send To Devices Send