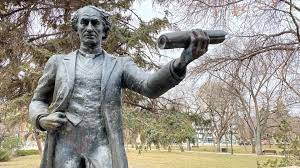 On March 31, 2021, Regina city council voted 7–4 in favour of removal of the statue citing that the “statue overlooks the negative impacts Macdonald’s policies and initiatives have had on Indigenous peoples.”

Macdonald’s (1867–1873, 1878–1891) policies include use of day schools and residential schools as tools of assimilation, relocation of Indigenous peoples away from traditional hunting and fishing areas to make room for European settlement, an inadequate and often corrupt system for delivering rations to reserves.

Regarding the justification for a residential school system, in his May 9, 1883, statement Macdonald unabashedly told the parliament: “When the school is on the reserve the child lives with its parents, who are savages; he is surrounded by savages, and though he may learn to read and write his habits, and training and mode of thought are Indian….It has strongly been pressed on myself, as the head of the (Indian Affairs) Department, that Indian children should be withdrawn as much as possible from the parental influence, and the only way to do that would be to put them in central training industrial schools where they will acquire the habits and modes of thought of white men.” It only exposed his imperial mindset and White man’s supremacy as people in many parts of Asia and Africa experienced it.

Also, John A. Macdonald discriminated against more than Indigenous peoples and had strong stances against immigration, enacting the Chinese Head Tax, dehumanizing other races as animals and fuelling anti-Asian racism that is still seen today It’s comforting news of removing the icons of imperialism. Hope, struggling masses will soon bury the ghost of racism along with fascist tendencies raising their heads all-around the world.

Bhagat Singh remains a powerful Symbol of the struggle against Imperialism
Agenda behind Modi ‘Farm Laws' Has been to Empower Big Corporations
Thinking of Chacha Ajit Singh And Agnes Smedley
How We Came to Suspect the Disquiet in Our Democracy - Badri Raina
Disha Ravi's Brave Statements in Court Should Challenge India's Judicial Conscience- Apoorvanand
Invoking farmers’ Revolt at Champaran ‘Kisan Morcha’ paid homage to Mahatma Gandhi On his Death Anni...
Share on Facebook Share
Share on Pinterest Pin it
Share on TwitterTweet
Share on Google Plus Plus
Send To Devices Send