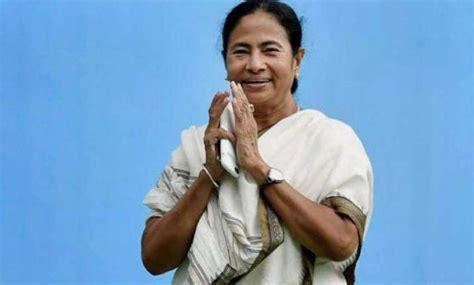 The ruling party in the Centre deployed over 52 Union ministers, MPs, chief ministers and cabinet ministers of BJP-ruled states to campaign in Bengal. Around 15 to 17 senior BJP and RSS leaders were stationed in Bengal for more than three months.

BJP engineered large-scale defections from Trinamool Congress (TMC), Left and Congress and portrayed itself as the favourite. A completely one-sided media which manufactured a BJP-wave narrative in Bengal. A host of central agencies intimidated and harassed TMC candidates by summoning them during the election campaign. A non-neutral Election Commission whose design of the election phases gave undue advantage to one particular party.

However, in the end, the mandate was overwhelmingly against the saffron party. An incumbent government of 10 years secured 47.95% votes in its third term. TMC swept the state by winning 213 of the 292 seats in the state. This is TMC’s best performance ever. Bengal assembly has 294 seats, elections are due in two seats as candidates have died after testing positive for COVID-19.

Mamata Banerjee emerged as the woman who brought the Modi-Shah politicking to a grinding halt. How did it happen?

In the assembly election, TMC had run an aggressive campaign and women were at the centre of it. The ruling party was aware of the role women vote banks could play in this election, just like in Bihar elections.

According to the Election Commission, the total number of voters in the state was 7.32 crore, among whom 3.73 crore were male, and 3.59 crore female.

TMC’s appeal to the women’s electorate was not just limited to campaigns and speeches. The Banerjee government over the past 10 years has specifically targeted women and girls through its policies.

The most talked-about among them is the Kanyashree scheme launched in 2013, which provides cash handouts to girls between 13 and 18, provided they remain unmarried and in school. The broader aim of the scheme is to prevent child marriage and reduce the school dropout rate among girls. The scheme also won the United Nations Public Service Award at The Hague in 2017.

Another scheme called Rupashree, launched in 2018, provides a one-time financial grant of Rs 25,000 for economically stressed families at the time of their adult daughters’ weddings. This scheme too aims to deter child marriages.

Swasthya Sathi, the health insurance scheme, offers a family health card issued in the name of the household matriarch. “Through her policies, she (Mamata) is breaking the patriarchal structure of our society and bringing women to the forefront,” state health minister Chandrima Bhattacharya had said.

The Wire found that these schemes struck a chord and women were vocal about the benefits. At South 24 Parganas, Kulpi, one Biswanath Das told The Wire, “Men switch their votes, but women won’t. They are firmly with Didi. No government helped women like this government.”

Since 2011, Banerjee’s government has focused on the welfare state model, which also led to allegations of rampant corruption.

Cash handouts were given to girls who continue in school, and a one-time cash transfer of Rs 25,000 for further studies or for getting married. Stipends for Dalit scholars; old-age pensions for women, folk artists were given, along with a cash handout to cover funeral costs. These schemes have been making a difference in the lives of several poor people.

The cash-handout scheme also has an economic impact on society. In a recent piece in Anandabazar Patrika, Maitreesh Ghatak, professor of economics at the London School of Economics (LSE), explained that in the past decade, the state rural consumption increased owing to various grant schemes of the government (Kanyashree, Krishak Bandhu, Yubashree). Ghatak also said that West Bengal’s success in reducing poverty over the past two decades has been similar, its success is greater than that of the rest of the country, and it is very clear in the last decade.

After the first lockdown was lifted last year, The Wire visited Purulia, one of the most backward districts of the state. Fifty-six-year-old Deben Sahis, who has a family of five, said, “Now we are alive because of the rice given by the state government, without that we would be dead by now.”

Even though Purulia largely voted for BJP, in this election TMC recovered some of its lost ground. In 2019, BJP was leading in all nine assembly segments of the district. But in the just-concluded assembly election, BJP came down to six seats and TMC bagged three seats from the district.

With the ‘Duare Sarkar’ campaign, TMC managed to take the welfare model one step further.A 60-day campaign for the delivery of specific 12 schemes of the state government to the people through outreach camps was organised at the level of gram panchayat and municipal wards. The campaign benefited a huge number of people across the state. 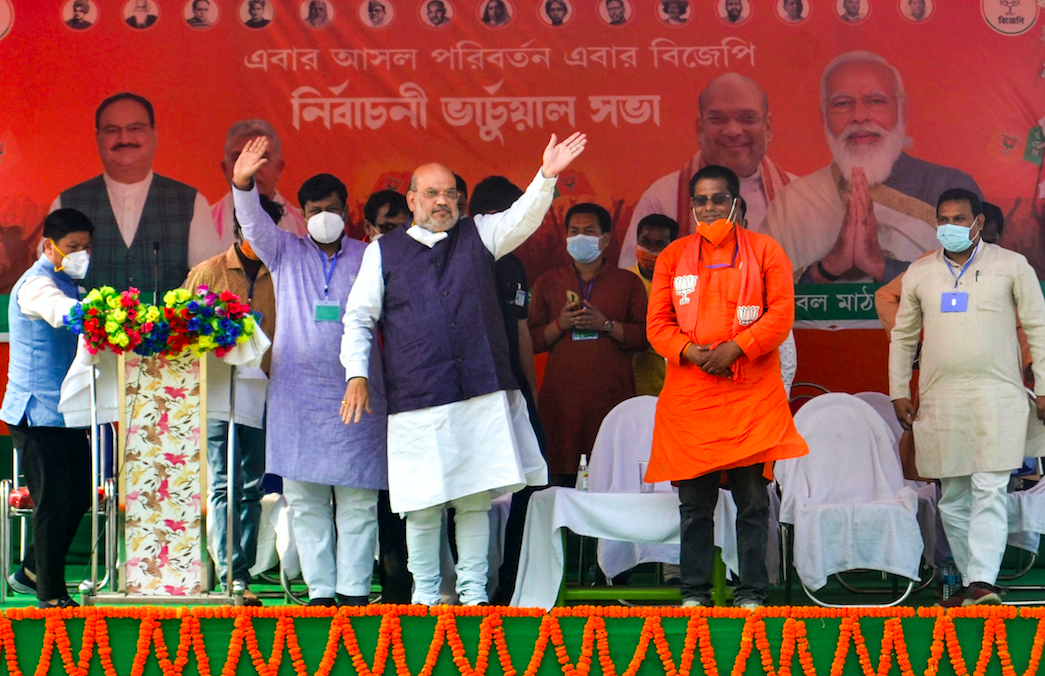 The single biggest factor which helped TMC sweep the assembly election is the party’s organisational strength.

As political scientist Dwaipayan Bhattacharyya described Bengal as a ‘party-society’ – party indeed remains the elementary institution of rural life in the state. Also, Bengal has witnessed a transformation from ‘party society’ to ‘identity politics’. However, the party still remains crucial.

The stronger party takes it all in Bengal. BJP appears no match for TMC in terms of the strength of the party. The saffron party lacks cadres, visibility and on the ground presence in most parts of the state. This is the primary reason for the cancellation of dozens of public meetings by home minister Amit Shah and party president J.P. Nadda. Some rallies by BJP star campaigner Adityanath, Smriti Irani, and Dharmendra Pradhan witnessed paltry crowds.

Similarly, the BJP’s rally on March 7 at the iconic Brigade Parade Grounds in Kolkata, which had a galaxy of BJP leaders speaking before Prime Minister Narendra Modi addressed the gathering, saw a modest crowd. Large portions of the field, on both sides of the main stage, remained empty. However, right before Modi’s chopper landed at the nearby Race Course, the size of the crowd swelled marginally.

The party, however, then resorted to chalking out a strategy. The large grounds were divided into slots partitioned by bamboo walls. Attendees were mainly packed into the narrow section right in front of the main dais, while most of the maidan (ground) remained unoccupied. This arrangement also gave the impression of a packed crowd to the cameras.

The Wire visited Uluberia Uttar constituency during the election, where the reporter observed more crowds at the helipad of the BJP state president Dilip Ghosh than at Ghosh’s roadshow.

In South 24 Parganas Kakdwip, a BJP worker sitting inside the party office told The Wire, “As long as Abhishek Banerjee is here, BJP can’t win a single seat here.”

Banerjee’s party apparatus ensured that TMC’s votes are intact and also converted the electorate who are otherwise unhappy with the party. Influential party leaders like Arup Roy in Howrah and Anubrata Mondal in Birbhum ensured tremendous results from their respective districts. In Howrah, TMC won 16 out of 16 seats; in Birbhum, Mondal secured 10 out of 11 seats for the party.

TMC, in the 2021 assembly election, received Muslim votes at an unprecedented level. The party won all the seats which had minority influence and literally finished the Left and the Congress. In the Congress bastions of Murshidabad and Malda, TMC won 18 of 20 and eight of 12 seats respectively. In South 24 Parganas, a district where many seats have substantial Muslim majority, TMC won 30 of 31 seats from the district.

According to the 2011 census, Muslims comprised 27% of the state’s population. Muslim votes transferred to the TMC out of fear of BJP coming to power in Bengal and implementing the National Register of Citizens (NRC).

Notably, the Muslim community did not take a chance with the Left, Congress and Indian Secular Front (ISF) alliance, fearing wastage of votes and paving way for BJP.

Mamata’s decision to contest from Nandigram

Since December last year, BJP has been aggressively engineering defections from TMC starting from block-level leaders to big names like Suvendu Adhikari, Rajib Banerjee, Shilbhadra Dutta, among others. Aided by media loyal to it, BJP successfully established a narrative that TMC’s time is up.

At this point, Banerjee’s spontaneous decision to contest from Nandigram, giving a direct challenge to lieutenant-turned-turncoat Suvendu Adhikari, played a pivotal role in boosting party workers’ morale. By contesting from Adhikari’s home turf in Nandigram, she made the election a referendum on her.

Banerjee relinquished her safe seat in Bhabanipur, thus enthusing TMC workers up overnight. The Wire observed this change among TMC party workers on the ground.

TMC worker Puroshottom Maity of Egra in Purbo Medinipur had then said, “Didi is fighting from Nandigram. She gave up her winning seat to teach Mir Jafar (traitor to Nawab Siraj Ud Daulah, indicating Adhikari) a lesson. This also shows her fighting spirit. From booth-level workers to top leaders, everyone is now energised.”

A senior TMC MP, speaking on the condition of anonymity, told The Wire, “Her decision of contesting from Nandigram was unexpected. This shows her indomitable courage. Also, it reflects her leadership quality. With this decision, she gave a message to everyone that she will stand first in the line of fire and she is not scared of that.”

Even though Banerjee has lost Nandigram to Suvendu Adhikari, TMC has won the much larger battle of winning Bengal with a decisive 213 seats.