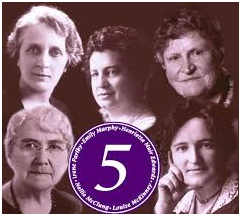 Ninety four years ago on August 27, 1927, Emily Murphy who became the first woman judge in Canada, invited four other women to her home in Edmonton. The group included  Henrietta Edwards, Nellie McClung, Louise McKinney and Irene Parlby. They  decided to frame a petition to the Supreme Court of Canada aimed at securing a ruling that women were to be regarded as “persons” in Canadian law and therefore eligible for appointment to the Canadian Senate.

In 1928, the Supreme Court of Canada, in response to the petition of the Alberta Five, ruled that women were not persons according to the British North America Act. Then, the case was appealed to the Privy Council in England which reversed the decision, and on October 18, 1929, women came to be officially recognized as “persons” in Canadian law.

All of them were involved in one way or another with populist farmers’ movements. McKinney was the first woman to be elected to Alberta legislature in 1917, as a representative of the populist Non-Partisan League. Parlby, the second woman became a cabinet minister in 1921, representing United Farmers of Alberta. Remaining three of the Alberta Five were women of faith who drew their inspiration from their religious convictions and experience; and two of them had a “conservative bent.” Non-partisan, Edwards — the oldest of the Alberta Five — was the author of two law books and a staunch advocate of property rights, in particular matrimonial property rights for women.

Their contribution to the development of women’s rights in Canada was recognized in 2000 with the dedication of a bronze statue called Women Are Persons! by Edmonton artist Barbara Paterson in Ottawa and Calgary (1999). The Famous 5 Foundation was established on 18 October 1996, on the 65th anniversary of the Persons Case. Its mandate is to “empower women and girls to courageously lead change that contributes to a society without boundaries for women.”

All five of these remarkable women were based in Alberta. For years they were known as the Alberta Five.

But, more recently, the Five have been the subject of renewed controversy. Some see them as symbols of modernity; of women’s political rebellion and progress; while others have criticized the group as racist and elitist. They feel that the Five’s accomplishments were tarnished by their support of laws that led to the forced sterilization of thousands of people, a disproportionate number of whom were Indigenous women.

But it seems unfair to trash their memory and accomplishments by prejudicially judging them by the values and standards of another day and age? Rather, on the anniversary of that historic meeting in Edmonton to secure recognition of the personhood of women in Canadian law, they should be simply acknowledged and celebrated.